During the time when John Wooden and his UCLA Bruins were dominating NCAA men’s basketball, winning 10 championships between 1964 and 1975, women’s collegiate basketball began to blossom in 1971, with the start of a competition to crown a women’s championship team.

Through the efforts of coach Cathy Rush at Immaculata College (now University), and a few dedicated people who assisted her, the hoopsters at Immaculata began their winning ways that inaugural year of the AIAW (Association for Intercollegiate Athletics for Women) tournament by garnering the first of a three-peat performance, capturing the #1 spot during the 1972, 1973 and 1974 seasons.

The team also made the Finals at the AIAW championships the next two seasons and the Final Four in 1977, during Ms. Rush’s final year of coaching. 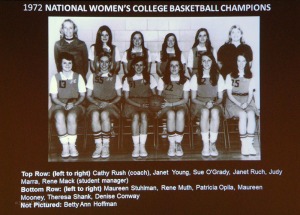 Many cite the emergence of the “Mighty Macs” as the birth of women’s collegiate basketball. With Cathy Rush at the helm those six seasons, the team amassed a 149-15 record (a .909 winning percentage) and that notation seems very well deserved.

As with many important or touching sporting events or seasons a feature film has been produced based on the true story, against all odds that there would even be a team or a court to play on, of that first winning season.

The film opens October 21 and should ably depict how determination and conviction can turn what seems to be an absolutely hopeless situation into the path to success by chasing one’s dreams.

The Immaculata team history may be viewed at: The Real Mighty Macs.

Anyone interested in sports history is sure to enjoy this film.