Dating from the 12th century, the historic Musée du Louvre (Louvre Museum or the Louvre) is one of the world’s largest museums and is the most visited art museum in the world.  It is one of the central and most notable landmarks of Paris, France, located on the Right Bank of the Seine. 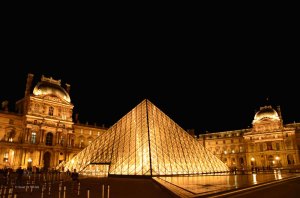 The Louvre houses approximately 35,000 objects, dating from prehistory to the 19th century, which are exhibited throughout an area of 652,300 square feet or 60,600 square metres.

Among the most notable pieces in the permanent collection are the Mona Lisa by Leonardo da Vinci (1503-1519), Venus de Milo by Alexandros of Antioch (130-100 BC) and Winged Victory of Samothrace or the Nike of Samothrace (approx 190 BC).

The Louvre is an absolute must-see art museum. However, due to it’s size and scope one should plan on spending a couple of days to fully appreciate all that it has to offer.

Photography is permitted, but not with a flash. Please respect the art.