Boasting a fairly colorful history, including standing as an exterior walls-only edifice for well over a century, Herstmonceux Castle’s name derived from very early 12th century owners of a manor house that existed on the site,  Idonea de Herst who married Ingelram de Monceux, a Norman nobleman. At that time, the manor house was called “Herst of the Monceux.”  There is evidence that in 1066 some other structure existed before the manor in this location. 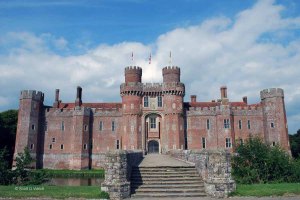 Construction of the actual castle did not begin until 1441 by Roger Fiennes, a Monceux descendant, who was appointed Treasurer of the Household by King Henry VI.  Unique to Herstmonceux is that brick was not a common material used during that time, as it was not being built as a fortress from which to defend attacks but, rather, as a grand residence.  In the early 18th century the castle was sold to another family and by 1777 it’s existence as a ruin began.

In 1913, new owners brought Herstmonceux back into life as a residence.  The castle changed hands between various owners until 1946 when it was purchased and turned into the Royal Greenwich Observatory, until it moved in 1988. 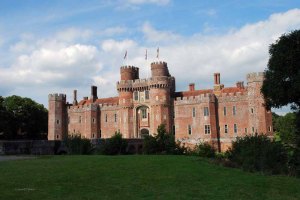 The castle sat vacant until 1992 when it became part of Queen’s University at Kingston (Ontario, Canada) and was known as  Queen’s International Study Centre (ISC), with primarily arts or commerce students.  The name later changed, in 2009, to Bader International Study Centre, after Alfred Bader, the Queen’s alum who first had the idea to turn this castle into a university study center. 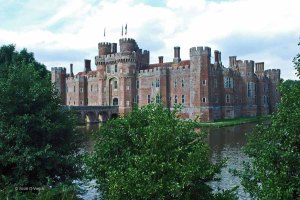 Though gaining entry to the ISC may not occur, the exterior grounds and the outstanding brick structure make it a worthwhile visit.

The Seven Sisters chalk cliffs form part of the South Downs Sussex Heritage Coast, and are one of Great Britain’s finest unspoiled coastlines. They are located near the English Channel, in East Sussex, southern England.

The cliffs reach a height of approximately 150 feet, and were formed 80-100 million years ago during what is called the Late Cretaceous period. The cliffs have been gradually eroded over time by the sea and are remnants of dry valleys in the chalk South Downs.

The Seven Sisters cliffs have been filmed for both movie and television productions, being used as a stand-in for the more-famous White Cliffs of Dover, which face Continental Europe and are across the narrowest part of the English Channel.

Most recently the cliffs were featured on the silver screen during the beginning of Robin Hood: Prince of Thieves, and at the end of Atonement. 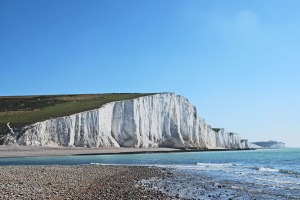 Though it is nearly a one mile walk from the Seven Sisters Country Park parking lot to the base of the cliffs it is well worth the effort to view one of nature’s most beautiful and well-maintained creations.

The imposing Rochester Castle, a mighty Norman tower-keep of Kentish ragstone standing 113 feet, was built c. 1127 by William of Corbeil, Archbishop of Canterbury. It stands on the east bank of the River Medway. 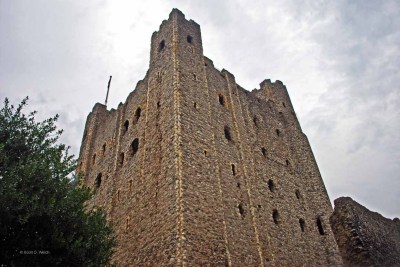 Rochester is the tallest keep (central tower) in England and has been the commanding presence of the city and river crossing for over nine centuries. The castle and keep take up half of the Roman-built walled city. 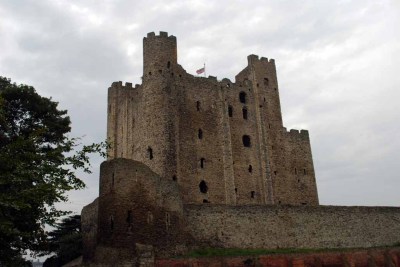 From the 12th into the 14th centuries Rochester Castle played an important role in defending against invasion and uprising threats. 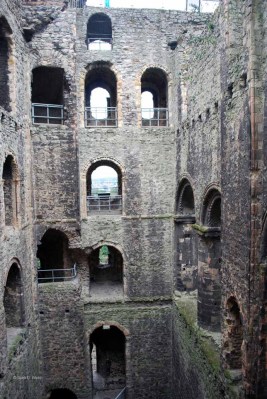 After falling into disrepair, King Edward III reconstructed the castle and it was fully functional by 1400. Over the next three centuries it was, once again, neglected and vandalized until the city took command of the property. 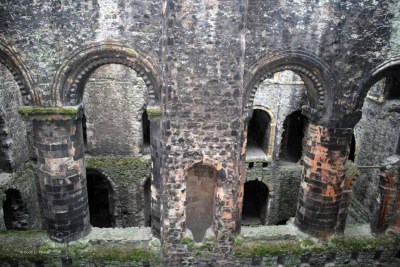 Though the castle’s center wooden flooring no longer exists there are passageways and stairs that carry visitors to the top of the keep, offering impressive views in all directions. 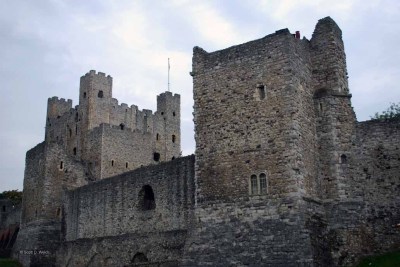 The English Heritage now has responsibility for preservation and its doors are open to the public. This castle is a must see when visting the South of England.

Bodiam Castle, located near Robertsbridge, East Sussex, England, was built in 1385 to defend the area during the Hundred Years’ War against the French.

What remains today is a beautiful piece of history.

Not an overwhleming structure by any means, and small by some standards, there were design elements calculated to deceive invaders, the main one being that the moat was planned so that the sun would reflect the entirety of the castle at any time, thus making it appear larger and more forbidding.

Though it was only occupied for approximately three centuries before being partially dismantled, then left as a ruin for decades and in the mid 18th century was somewhat restored, the remains provide visitors with a fabulous walk in the past. One marvels at the workmanship dating back almost 750 years and speculates what life would have been like with a castle as a home.

Truly a unique castle in the South of England, cared for since 1925 by The National Trust.

More images are available at this link: Bodiam Castle at Flickr.